Since 2003, the Indian economy has been clocking a pretty impressive year-on-year GDP growth. 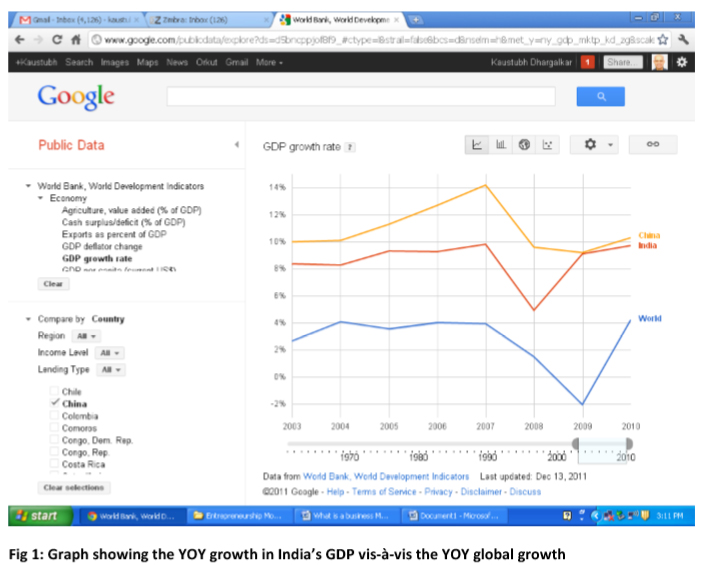 As the graph suggests, barring 2008, the GDP has grown consistently beyond 8%( way above the global average), which is a highly encouraging sign( China being the only country to have performed better). With this as the backdrop, India had been slated to grow at a minimum of 8.5 % in 2011. However, as the scenario has unfolded over the last 12 months, there is nothing to cheer about. Growth has steadily declined every quarter of 2011. The following table elaborates this point.

The September- December results have not been declared. The signs don’t seem encouraging at all.

India, with a population of 1.3 trillion has enough consumption potential to keep pushing up the GDP consistently at 8.5% plus. So why is that not happening?

Is the RBI responsible, Is the government responsible or the oft-quoted invisible ‘foreign hand’?

Following is an attempt to grasp the entire situation objectively.

From Mar ’11 to Oct ’11, RBI hiked interest rates by almost 400 basis points( i.e. 4%). Theoritically, this made sense, to curb inflation, it had to intervene. However, in reality, prices have not come down, but Industry has had to face higher cost of capital pushing the Index of Industrial Output(IIP) threateningly downward. Industry has suffered, resulting in lower tax collections, leading to widening the fiscal deficit to around 5.5%, by far the highest in recent memory. Subir Gokarn, the Dy. Governor of RBI has indicated in no uncertain terms that further rate hikes will not happen. However, the damage is done. India Inc prefers to wait & watch. The interest rate hikes, coupled with the Eurozone crisis & consequent weakening of the Rupee, thus increasing the costs of essential imports, Indian businesses have not been able to generate enough bottomlines to remain upbeat about the economy. High costs will suppress demand leading to lowering the attractiveness of India Inc to attract foreign investments. In 2011, outward foreign investment was $ 29billion whereas, inward direct investment was $23billion. Higher domestic interest rates have forced India Inc to look for cheaper loans abroad, however, the weakening of the Rupee has eroded their capacity to borrow overseas. Foreign loans sought by Indian companies have dropped from $5.63 billion in Mar’11 to $ 1.33 Billion in Nov’11.

Can the fiscal deficit be brought down? Unlikely, considering that the Congress faces elections in five states this year, populism will score over pragmatism. Unless the government shows some spine, it is unlikely & this government has proven, time & again, that it has no spine. The Food security bill may go through in the parliament in the coming year, thus dealing another knockout punch to the deficit. To bridge the fiscal deficit, the govt., in September, announced a hike in interest rates on PPF. This forced banks to hike the savings interest rates to attract small savings. Another measure to contain the fiscal deficit is to disinvest from PSUs, but considering the sentiment on Dalal street, that is easier said than done. The UPA govt. is refusing to accept reality & is in a state of denial, despite the indicators staring them in the face. The opposition too, by remaining at its heckling best, is ensuring complete nongovernance, adding to the misery. There is a complete policy paralysis in the corridors of power. Industry prefers to wait & watch, foreign industry stays away despite the huge size of the Indian market, foreign investors retreat to the so-called safety of the dollar. The end result? The sheen on the India growth story seems to be wearing down. Another case of the golden egg failing to hatch.

The Eurozone crisis, US debt crisis & Japan at a standstill have affected India’s exports & will continue doing so in 2012. This will be detrimental to our forex reserves. The Rupee may continue its downward spiral for a while. RBI may pump dollars into the market to stem this but again depletion of forex reserves is not something that RBI would like. Speculative investors will shy away from India & retreat to the supposed safety of the dollar( The US has, over decades, systematically created a global economic order to ensure that dollar remains a safe destination, however profligate & inefficient the US govt. remains, that could be a different matter to discuss ).

The UPA govt. needs to quickly get its act together. It should initiate infrastructure projects asap. These projects, due to their large scope have a strong trickledown effect on the entire economy. Demand increases in steel, automobile, realty, housing, education, commodities sectors, almost everything gets a boost. The common man too benefits in the process( in case the govt has forgotten the cause of its existence) after all, who would say no to better roads, railways, clean drinking water, better healthcare…..

Sounds too simple to be true, but that’s how solutions ought to be.

What business are we in?