The republicans & the democrats have come to a political patch up & increased the debt ceiling by $2.4 triliion to be able to meet the government’s debt obligations till 2013. There are two ways in which the debt can be controlled, viz. raise taxes or reduce government spending. The republicans, being traditionally the upper class naturally do not want tax rates to go up. The democrats, on the other hand do not want the government spending to go down (mainly on healthcare, social security & other such benefits). So what is White House to do? The republicans seem to have arm-twisted Obama into committing to a spending cut of $2.4 trillion in the coming two years. The democrats agree, rightly so, that a cut in spending will jeopardize the slow recovery that the US economy has been going through in the last 2 years or so. Less government spending means less jobs, less money in the hands of the masses & hence less consumption leading to a lower GDP. A lower GDP means lower tax collections further leading to reduced ability to cope with the rising debt. US debt currently (as of 3rd August, 2011) is 96% of the GDP. The GDP is showing no signs of health, so the US economy is in a perilous, if not comatose state.

With this background, S&P downgraded US from AAA to AA+, still far above than what the economy really deserves. The credit rating could fall even lower to AA in the next couple of years. The White House has condemned S&P for this logical move. Since 1971, the US debt has risen alarmingly & is now a Frankenstein ready to gobble up everything that comes its way. The bailout package of $700 billion (circa December 2008) has now been proven to be nothing but a prolonger of the agony. The graph below & the table that follows shows the grave acceleration towards doom in the name of saving today at the cost of tomorrow. 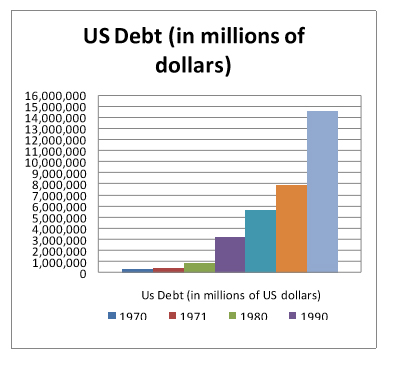 Increasing the debt limit is like giving more dope to a drug addict so that he remains in a stupor lest he create a scene. The argument goes that if the debt limit is not increased then all the current financial institutions will collapse & there will be mayhem across the globe.

But if these institutions are based on a flawed economic model, then is it not better to clean up once & for all & start with a clean slate? But this will never happen because there’s too much at stake for all the players concerned, they will lose the manipulative control that they exercise today.

Unless the industrial output & hence real growth exceeds the interest rates, there cannot be a way out of the current mess that we are in….. so is it wise to pass some more dope to the junkie to temporarily quiten him rather than de-addict him??? And de-addiction does not happen without the pain of withdrawal symptoms…

What business are we in?